What should I look for when selecting footwear?

Most of us would readily confess that colour and aesthetics are possibly the prime drivers when looking for a new pair of running shoes.

Undoubtedly, it is important to enjoy your new purchase but what about looking at how your new shoes perform for you?

You will fall into one of three basic foot types which will have major implications about how your foot distributes impact forces during walking and running.

Assessment of your foot type can only be done when fully weight bearing – looking at your arches in a sitting position does not offer any insight into how your weight is distributed under load.

The type of terrain you are running on will determine whether you need more support or more cushioning to maximise comfort.

Shoe Selection: Look for a supportive shoe, i.e. one that has a firm density sole on the inner aspect of the heel sometimes extending to the arch. The denser the material and the further it extends into the arch, the more supportive the shoe. The trade-off is, of course that the shoe becomes increasingly more rigid, requiring more energy to transfer weight from heel to toe.

Shoe Selection: people with a high arch would often benefit from a cushioned shoe in which the sole of the shoe assists in dispersing impact forces. The anomaly, of course, is that the footwear market is inundated with cheap, colourful and “trendy” cushioned shoes (which are cheaper to produce) but the proportion of people that may benefit from these shoes is actually very small.

What about Free Shoes? 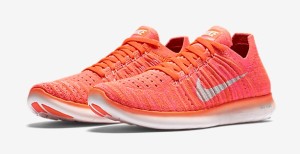 The progression to a “free” shoe in which there is minimal sole support is taking the concept of a cushioned shoe to an extreme form.

“Free” footwear is linked to a transition to forefoot running (or pose running) in which the athlete tilts the body marginally forward so that the centre of gravity is always marginally in front of the body. The concept is that this is a fundamentally more “efficient” running style (think Kenyon distance runners), which requires “minimal” effort to place one leg in front of the other to stop the athlete from falling forward.

The consequently leads to running on the toes with little or no heel strike which many would argue is the “natural” way of running compared to a heel strike gait.

Although, in theory there is much to like about the concepts of forefoot running, in reality, transitioning from a heel or neutral strike gait to a forefoot gait takes considerable effort and long term progressions as there is a massive load shift to the posterior thigh, calf and heel such as the hamstrings, calves and achilles.

This is akin to changing your grip in tennis or golf or your stroke in swimming – it can be done, but needs to be guided and progressed systematically and of course, there needs to be a logical reason to undertake this transition.

Orthotics are important in achieving an optimal “neutral” position with the shoe, in the same way that glasses artificially “correct” impaired vision.

Orthotics cannot correct the inherent anatomy and biomechanics of the foot, but do assist in artificially controlling early foot flattening during gait. Ultimately, an orthotic device inside a cushioned (soft) shoe is rendered valueless as the foot continues to roll inwards even if it is initially in a “better” starting position.

It is far better to invest in improved supportive footwear before considering whether to include an orthotic device.

Do I need a customised orthotic?

The simple answer is “NO”.  A customised orthotic is designed to achieve optimal foot correction which might look great in a controlled clinical setting, but more often than not, results in an entirely different set of problems as previously unloaded structures are suddenly loaded. 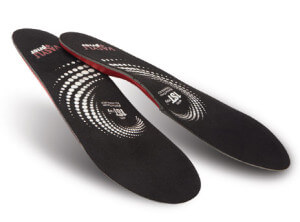 We need to remember that our aim is not to achieve anatomical perfection, but to unload structures on the inner aspect of the foot, shin and knee, so in this case we might concede that “less is more”.

If, at a later stage, we feel that we might benefit from increased arch support, then a customised device might serve as the appropriate progression.

Speak to our staff about our pre-fabricated orthotic devices which are easily fitted and extremely affordable.

So, where do I start?

Although well meaning, footwear stores that offer foot assessments (often based on a force platform) are often staffed with part-time or casual staff that have little understanding of foot dynamics. Do not seek professional advice from people that have no professional training.

Have someone take a photo of your feet while standing. Look at your feet from the front. Can you see a bulge where the arch should be? This is a strong indicator of a flat or pronated foot.

Take a photo of your achilles. A normal achilles looks like an hourglass with an even curve on the inside as well as the outside of the tendon. A flat foot generally has an achilles in which the inner aspect is flat whilst the outer border is excessively curved. You might also see that the heel tilts inwards.

In general, a flat foot tends to result in a broader forefoot and is a major driver in the creation of bunions (medically known as hallux valgus).

If you have a pronated or flat foot, there is increased likelihood that you might have a stress reaction on the inner aspect of the foot just above the arch. This is the navicula bone which is subject to stress reaction and stress fractures.

There is also often tenderness along the inner shaft of the shin bone just above the ankle and possibly pain behind the knee cap.

Peter can help you with the correct shoe selection, call Spine and Body on 07 5531 6422 to book an appointment.