Current evidence indicates that clinicians are attending to an increased number of cases of cervical [neck] and upper limb pain in recent years. It is of great concern  that unlike low back pain which is often linked to heavy work, repetitive lifting or prolonged sitting in a mid to older population, neck and upper limb pain appears to be as prevalent within a younger demographic as it is amongst older sufferers. There is emerging evidence to suggest that our escalating reliance on computers and other personal electronic devices may be high on the list of risk factors and may be causing untold damage to a wider spectrum of age groups and occupations. In fact, because a considerable part of our recreational time now involves electronic hand held devices, there appears to be a degree of incremental loading occurring on the neck facet joints and discs on top of the accumulated forces incurred during work and school time.

A common clinical scenario involves the gradual onset of increased stiffness of the upper thoracic spine [ at the base of the neck] with a noticeable loss in rotation to either side, a feeling of restriction or pain when the head is allowed to fall forwards and a “ crunching” or “ grinding”  noise and restriction when looking up at the ceiling. If left untreated, patients will often report the gradual onset of a number of associated symptoms. These may include a low grade headache, loss of shoulder flexibility especially when reaching up, possible tightening of the jaw and facial muscles, point tenderness at the apex of the shoulder blade and finally radiating left or right arm pain and even some loss of sensation or the onset of pins and needles into the forearm or hand.

The biomechanics that drive these symptoms are akin to the forces experienced if one was to hold up a ten pin bowling ball with the elbow resting on a bench. With the forearm entirely vertical, holding up the bowling ball would not require much muscle activity nor would it place undue pressure on the wrist or forearm muscles. If however, we were to tilt the ball forward, the forearm muscles would quickly fatigue and the wrist would start to ache due to the weight of the ball. The further from upright we tilt the ball, the greater the forces placed on the forearm and wrist and the earlier the fatigue and onset of pain. 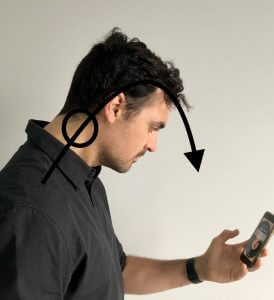 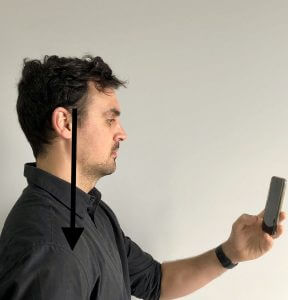 The weight of the human head roughly equates to the weight of a bowling ball so this demonstration is a reasonable indicator of just how much effort is required to hold the head in a bent forward position when looking down at a device. More importantly, the activation of surrounding muscles in this position creates a significant increase in the compressive forces within the facet joints of the neck and upper back leading to early degenerative [osteoarthritic] changes. This two-fold effect ultimately leads to pain and dysfunction due to pain and inflammation caused by joint arthritic changes and may elicit nerve pain radiating into the arm[s] or shoulder blade.

The C7 – T1 segment is uniquely vulnerable to excessive torque forces as it forms the junction between the relatively mobile cervical [ neck ] spine and the relatively more rigid thoracic [ upper back] spine which is bound by the rib cage. Biomechanically, the transmitted forces created by hanging the head forward are compounded at this junction point and exacerbated by turning the head left and right whilst in this position. This leads to a unique presentation in which there may be early onset of pain at the apex of either shoulder blade. Further encroachment of the C7 nerve root invariably leads to pain along the anatomical regions supplied by this nerve root , namely the triceps [ back of the upper arm] and may extend to the inner forearm and the little and ring finger. Sufferers of C7 nerve root encroachment often report relief when placing the affected hand on top or behind the head whereas symptoms are often made worse with the arm by the side. This occurs because tension on the C7 nerve root is reduced when the arm is elevated and tensioned when the arm is by the side.

Elevating the electronic device to eye level will assist in alleviating symptoms as will maintaining an upright posture and flexibility between the shoulder blades [ eg. arching over the back of a chair or on a foam roller and  stretching the arms between the uprights of a door frame to stretch the chest].

Above all, be mindful of maintaining an upright posture when using hand held devices or computer screens and try, where possible, to limit screen time to manageable blocks with regular stretching  between sessions.