Tennis & Golfer’s elbow (even if you don’t play either) 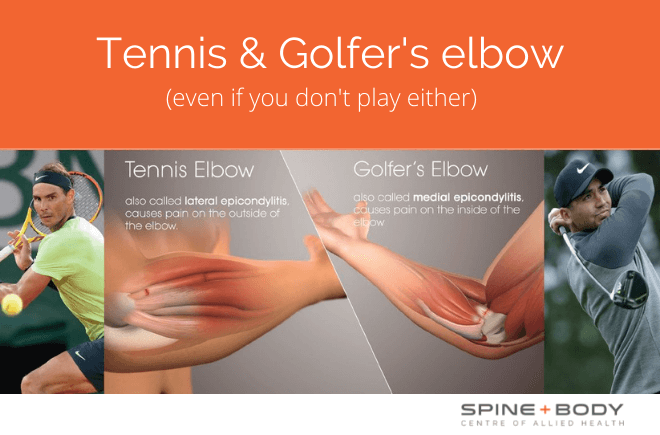 The two most common and recurring problems affecting the forearm are commonly referred to as “Tennis Elbow “[lateral epicondylitis] and Golfer’s Elbow [medial epicondylitis].

Clearly, the names stem from common sports related origins for both – more specifically, “Tennis Elbow “ often results from repeated or poorly executed top spin back hand and “Golfer’s Elbow “ from repeatedly attempting to “scoop” a golf ball out of a bunker. Pain is generally localised to a specific spot – in the case of Tennis Elbow, pain is localised to the outside aspect of the forearm whereas in the case of Golfer’s Elbow, pain is localised to the inner aspect. These anatomical sites represent the attachment points of the group of muscles on either side of the forearm responsible for gripping and cocking the wrist back [ extensor muscles associated with Tennis Elbow] and curling the fingers into a fist and curling the wrist towards the inner forearm [ flexor muscles leading to Golfer’s Elbow] .

Needless to say, by far the greatest cause for Tennis and Golfer’s Elbow does not relate to either sport but occurs as a consequence of overloading the relevant forearm muscles either through repeated loading, a single excessive effort or trauma to either side of the elbow.

Symptoms include loss of grip strength, localised pain on touch to either side of the forearm, often a resting ache or throbbing pain extending away from the elbow and most frequently a gradual ache in the neck and upper back on the symptomatic side. Often with neck related symptoms, there may be an alteration of sensation from the elbow towards the hand which may include tingling, numbness or a burning ache [causalgic pain].

Tennis and Golfer’s elbow stemming from a singular episode

Most commonly the onset of either condition is related to a specific overuse event such as using a hand drill, hand saw or other hand held tool for considerable time, typing or hand writing for a lengthy period, gripping and lifting a heavy weight or gripping forcefully for some time. Direct trauma to either the outside or inside of the forearm such as bumping into a sharp corner can also lead to the onset of symptoms which generally resolve once the localised swelling and inflammation resolves.

Treatment for these singular episodic events usually rely on settling the inflammatory process. Ice packs for 10 minutes, rest from provocative activities involving repeated or excessive gripping, gentle massage, stretching and anti- inflammatory medication or gels applied to the area will often suffice in alleviating symptoms. In some cases, wearing a tennis elbow brace for several days will offer support and deflect the forces generated by gripping away from the localised anatomical sites on either side of the forearm.

In more resistant cases, prolonged use of a Tennis Elbow band or brace may assist as would the use of dynamic tape suitably applied to de-compress the affected muscle –tendon junction. In the event that this approach fails to resolve the pain, localised cortisone injection[s] by a qualified medical practitioner may help to rapidly diminish the inflammatory process. Rehabilitative exercises should never include resisted gripping [ ie. Squeezing a ball] but should be aimed at stretching the affected structures and using eccentric exercise as a means of re-introducing muscle activation. In the case of Tennis Elbow, this entails cocking the wrist back with the forearm supported without resistance and then applying gentle resistance to the back of the hand as the wrist is returned to the neutral position [flat].

The opposite applies for Golfer’s Elbow – curl the wrist towards the inner forearm without any resistance and apply gentle resistance to push the wrist back to a flat position. This type of resistance exercise has been shown to be the least provocative and serves as an ideal precursor to active resisted exercise as symptoms improve.

Pain as part of generalised upper limb and shoulder pain

In many cases, Golfer’s or Tennis Elbow may represent the end stage of a larger pattern of pain originating with stiffness and pain in the neck and gradual upper limb nerve pain radiating to the upper arm and forearm. In many cases this relates to poor posture coupled with repetitive use of the upper limb[s]. This is particularly relevant to process workers and those undertaking data entry who tend to work with the head bent forward. Regrettably, this is becoming more prevalent as the use of screen time recreationally for many people places them at risk.

It is vitally important that solutions for both Golfer’s and Tennis Elbow incorporate a much more extensive approach clearing the neck of any neural involvement, releasing restricted shoulder and upper limb structures as well as targeting the affected elbow structures. Concentrating on the elbow structures in isolation will ultimately reduce the local symptoms but fail to address the causative biomechanical issues.

Xrays are generally not useful in viewing the affected structures as the damage is not related to bony structures [although in some rare cases a sliver of bone may dislodge at the attachment site of the tendon to the bone]. The preferred investigation is an ultrasound scan which can identify damage to the tendons and surrounding soft tissues or, alternately an MRI which can offer views to the underlying attachment site to the bone as well.

Treatment may involve one of two injectable options. If inflammation is deemed to be the most significant limiting factor, a localised cortisone injection to the structures surrounding the attachment of the tendon to the bone can rapidly resolve pain and restore function when coupled with rehabilitative exercises. In the short term, symptoms may worsen temporarily as a small volume of cortisone is introduced to an already swollen area but this resolves within 24- 48 hours generally.

The other option is PRP [Plasma Enriched Protein] injection[s] in which a small volume of blood is extracted from a forearm vein. The blood is then placed in a centrifuge so as to separate the blood cells from the plasma which is then injected into the problem area. This is particularly beneficial in cases where there may be a tear in the muscle or tendon by providing the basic protein necessary to repair the area. This is a minimally invasive procedure that can be performed in most radiology practices on referral from your local doctor. It is also unlikely to create an adverse response as the plasma is derived from the patient.

Peter is Director and Founder of Spine + Body Centre of Allied Health on the Gold Coast ph: 07 5531 6422  e: info@spineandbody.com.au