Inflammation – not always a bad thing. 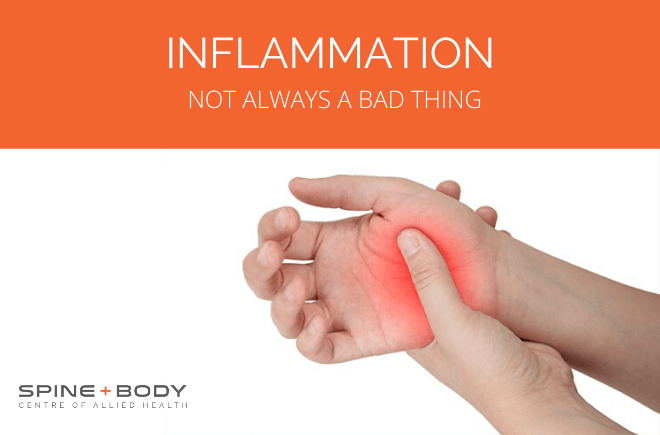 Anyone who has ever experienced low back or neck pain, strained ligaments or muscle tears will be familiar with the swelling associated with that injury.

In some instances, swelling is evident almost immediately after injury whereas, at other times, swelling may emerge overnight. The implications of how rapidly swelling presents itself can be a strong diagnostic indicator in identifying what structure has been injured and perhaps to what degree. Immediate swelling points towards a bleeding structure – think bone or muscle, both of which are well vascularised with capillaries. Damaged capillaries invariably result in haemorrhaging into surrounding soft tissues such as muscle or into a joint capsule such as a knee joint.

A bleeding injury will generally feel warmer than the surrounding skin and may feel “doughy“ to the touch especially after several days as the blood starts to consolidate into a mass of scar tissue.

Swelling that occurs overnight is much more likely to be largely inflammatory in nature. In this instance, the fluid produced is largely the “straw coloured” plasma which constitutes part of the blood without the red and white blood cells. This is an important factor in providing the raw substrate necessary to create scarring, ultimately bonding the damaged tissue.

So, given that inflammation is a primary cause of swelling which restricts joint movement and causes pain and dysfunction, it would be reasonable to assume that reversing the inflammatory process would be beneficial to recovery.

In the case of bleeding, it is vital that haemorrhaging cease ASAP hence the use of ice, compression, elevation, rest from further aggravation and the avoidance of heat, massage and stretching. Bleeding within a joint or between muscle compartments can lead to further pain and dysfunction as the blood breaks down into waste product. This process can create a mildly acidic environment resulting in excessive scarring through tissue irritation and can initiate erosion of the articular surface of a joint leading to early degenerative changes. In this case, it would be important to clear the affected tissues of stagnant blood after 72 hours which is generally considered the safe period following trauma by which time active bleeding should have ceased. Options can include gentle soft tissue massage, exercise, therapeutic ultrasound and in extreme cases of bleeding within a joint [generally a knee], aspiration [removal of blood via a syringe] may assist. Aspiration is generally considered as a last option as there is a small but present risk of creating a possible intra- articular infection.

In the case of joint inflammation not involving any bleeding such as osteo or rheumatoid arthritis, non-steroidal anti – inflammatory medication and gentle movement can certainly assist. The list of NSAI medications can include Ibuprofen [marketed as Nurofen, Advil and Bugesic], Diclofenac [marketed as Voltaren and Fenac], Naproxen [Naprosyn, Naprogesic, Aleve] or Celecoxib [Celebrex].

These drugs all work to chemically block the inflammatory process through slightly different pathways as does cortisone when injected directly into a joint.

As a practitioner working to restore full function post injury, I would argue that in many cases, the use of NSAI medication may not serve the best interests of the patient. These cases include shoulder and patella [knee cap] dislocation and most commonly, spinal disc prolapses [disc bulge or “slipped“ disc] in which the outer layer of the disc is stretched or torn allowing the disc nucleus to bulge onto surrounding structures including nerves causing referred pain. In such cases, it would be far more preferable to undertake appropriate manual therapy for spinal disc pain and a period of immobilisation for shoulder and knee dislocation without the use of NSAI to encourage significant scarring as a result of the inflammatory process to help restore joint or disc stability. It would appear to be counter-productive to a damaged disc or dislocated joint to chemically block the inflammatory process that can restore some degree of healing and subsequent stability through scarring.

It may be worthwhile discussing management options with your doctor or therapist in these specific cases.