Acute Injures – What you need to know 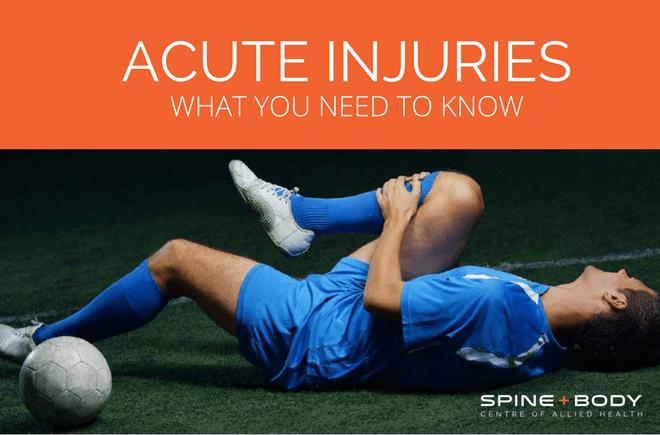 The term “acute” refers to an injury that has occurred recently as compared to “chronic” which describes an injury persisting for three months or longer.

These terms are frequently incorrectly used to describe severity.

The aim of managing any injury is to:

Acute injuries can be described as a “strain” (muscle or tendon), “sprain” (ligament or joint capsule), “contusion” (blunt trauma), “laceration” or “fracture” (which describes any injury to bone).

Commonly, injuries involve multiple structures. The location and severity of the injury will determine the priority of treatment responses. The rate of healing will depend on the type of structure injured.

The only exception to this rule relates to the big bones of the thigh (the femur) and the shin (tibia) which require more than 12 weeks of healing time due to the thickness of the bone.

The Severity of the Injury

Soft tissue injuries are rated from Grade 1 (minor trauma to a few fibres) to Grade 3 in which the structure is entirely disrupted (full thickness tear).

Grade 3 injuries in many cases may require surgical repair or reconstruction to restore function.

Adopting to the R.I.C.E principals will significantly improve injury outcomes.

I               Ice the affected area to minimise internal bleeding and swelling. Ice should be applied for no more than 10 minutes at a time and should be separated from direct skin contact by a moist towel or cloth.

C             Apply compression to the injured site to stem bleeding and swelling.

If applying a compression bandage, always start below the injured site and work upwards. Compression garments are also useful.

E              Elevate the injured limb to minimise bleeding and swelling tracking between tissue layers resulting in pain and bruising further down the limb.

DO NOT apply heat for at least the first 72 hours as this increases bleeding and swelling.

Aggressive massage and continued activity immediately following an injury will not only worsen the injury but can lead to complications such as Myositis Ossiticans, a condition in which the damaged tissue becomes impregnated with calcium rather than scar tissue forming a painful mass of bone.

Depending on the severity of the injury, in most cases, the application of heat, gentle massage and exercise can resume after the first 72 hours.

Pain is not an accurate guide to the severity of an injury as mild to moderate (Grade 1 or 2) injuries can be quite painful due to trauma and inflammation to sensory nerves whereas more severe injuries (Grade 3), may also disrupt the neural supply thereby reducing the ability to sense pain.

Always seek an accurate diagnosis and management plan from your allied health or medical practitioner to get back to full function as soon as possible.